Where is Taiwan? You might think this question a tad simple; Taiwan’s in Asia, right? Yes, it certainly is, but there are quite a few interesting and unique features related to the island’s geography. For starters, Taiwan is an island located off the southeastern part of the Chinese mainland. Both Hong Kong and Macau are further south than Taiwan, but only a 1.5 hour flight away. To give you a rough idea of location, it might help to think of it in terms of air flights. A hop to Tokyo from Taipei is a three hour flight north-east, while a trip to Bangkok is a three and a half hour flight south-east. Beijing is roughly 4 or 5 hours north-west. Where is Taiwan? A trip to the vacation island of Bali is a 5 hour flight due south. Due to its aircraft carrier-like position, Taiwan is a great place from which to explore the rest of Asia. Many who move to Taiwan to teach English or work in other professions find that it’s very easy to organize weekend jaunts to nearby attractions. 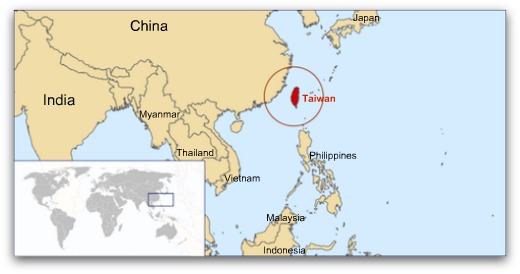 For several reasons, Taiwan is extremely densely populated. In fact, leaving aside some truly tiny nations such as Monaco, Taiwan is in the top ten most densely populated places in the world with 636 people per square kilometer. The island of Taiwan is not particularly small, but its useful land surface is tiny. Taiwan is spread over approximately 36,000 square kilometers, but as much as two thirds of the island is mountains. Taiwan boasts at least 100 peaks that stand over 3,000 meters, (9,843 ft.) making it the fourth highest island in the world. In other words, there just aint a lot of space for taiwan poplation of almost 24 million people to live on. Owing to the constricts of Taiwan’s geography, pretty much everyone lives in the basins of Taipei and Taichung or along the island’s central and southern plains. Taipei City is like a bowl, almost completely surrounded by mountains. The next time you take the high speed (bullet) train from Taipei to Kaohsiung pay attention to the topography when you reach roughly the midway point. You’ll see mountains to the left and at the horizon to your right; the Taiwan Strait might be visible on a good day. That’s all the open space Taiwan really has; the rest of it is mountains.

Where is Taiwan exactly?

The simplest answer is to where is Taiwan: right next to China. Taiwan sits 120 kilometres from China. As Taiwan and China’s land masses bulge along parts of their respective coasts, in some places the distance between the two sides of the Strait is even less than 120 km.

Interesting aside: There has been talk for many years of building a bridge or even a tunnel to connect the two sides and indeed the Chinese claim to be actively preparing for such a project. Instead of trying to bridge 120 km of open sea, some engineers want to use outlying islands as stepping stones. This idea would connect China’s Xiamen City to the Taiwan-controlled Kinmen islets before heading towards the Penghu archipelago and then over to south-central Taiwan. Should this project ever get off the ground, the island-hopping concept is the most likely, but most realistic observers say the idea is based more on political considerations than sound engineering and that in practice the whole endeavor would be extremely difficult to pull off. Let’s just say we’re not expecting to see such a bridge in our lifetimes.

Where is Taiwan? Taiwan’s Climate and Geography

Taiwan sits upon two major tectonic plates and as such, there’s a whole lot of slipping and sliding going on. There are minor earthquakes – mostly unnoticed – on a daily basis and reasonably sized tremors are extremely common. You’ll be sitting at your desk and you’ll notice a slight swaying… it’s not your hangover… it’s an earthquake. Thankfully, major events are less common. The last horrific quake occurred on September 21st, 1999 and killed nearly 2500 people, mostly near the epicenter located in central Taiwan. 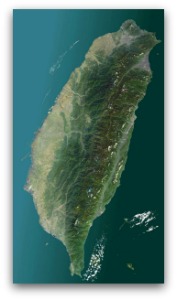 The tropic of Cancer cuts though Taiwan, making it one of the planet’s few islands that is both tropical and sub-tropical. The line of Cancer runs through southern Taiwan’s Chiayi and there is a monument there marking the spot. Due to this division, the weather in north Taiwan is remarkably different from the south. The north is a tad bit like the U.S. city of Seattle, often rainy with a touch of that “mountain-forest” feeling. Southern Taiwan resembles south Florida, with hot and muggy summers, little rain and a winter that never seems to really kick in. The entire island is vulnerable to typhoons (called hurricanes in the west and cyclones in East Asia) which generally hit hardest each year from July to November. If you’re new to Taiwan you might find the winds and floods scary at first, but after a while, you’ll begin to treat these storms as vacation days as most workers are told to remain home… with pay! That said, being stupid during a typhoon can cost you your life, so do follow relevant instructions from authorities.