Taroko Gorge was once home to the indigenous tribes of the Truku (or taroko people) and the Atayal – known for their weaving, headhunting and facial tattoos. Many of the hiking trails were once ancient hunting paths made by the two tribes. In the beginning of the 19th century, the Japanese occupied Taiwan and built a highway through the gorge as well as extracted other natural resources against the tribes’ wishes. The Tribes fought for their land for 18 years but eventually lost to Japanese Military. Most relocated to Hualien except a few families that own weaving and craft businesses selling souvenirs to tourists or Bed and Breakfasts (B&B). Taroko Gorge National Park was not officially a national park until 1986. 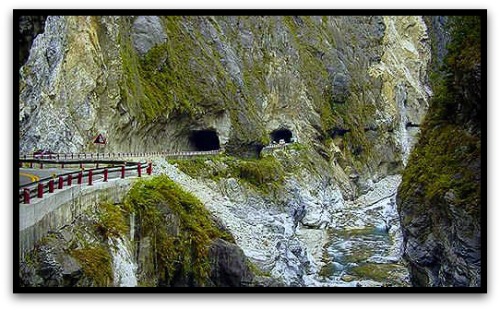 Taroko Gorge gets its name from the Truku tribe of Taiwanese aboriginals. It means “magnificent and wonderful”. According to the locals, “Taroko!” is what one of the tribesmen exclaimed upon seeing the gorge.

The Taroko Gorge entrance is located north of Haulien city. The gorge spans from the Cingshui cliffs from taiwan’s east coast, inland to the snow-capped central mountain range. It stretches across Hualien county to Nantou county and Taichung city (Taizhong). 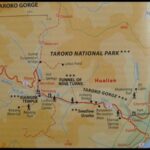 The Taiwan park has been forming for thousands of years. The Liwu river flows through the gorge, cutting its way into the pacific ocean. The erosion from its blue-grey waters have exposed sky scraping marble walls in the gorge that rise every year by 5cm / 2in. There is a unique type of 250 million year old jade found in the park that is not found anywhere else in the world – which locals extract and sell in local markets. But the cliff and mountains still maintain their beauty and color from the marble and jade that run through the gorge.

Can you spot the Indian Head? 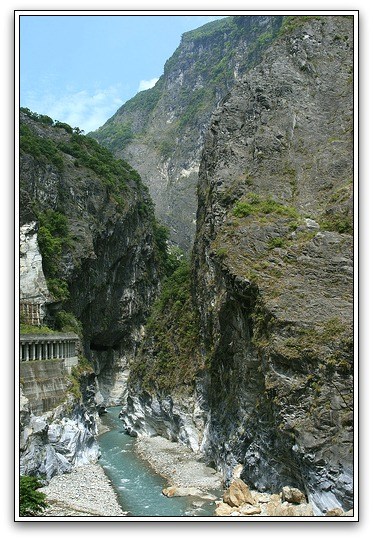 You can visit Taroko Gorge all year long. During the winter, however, the weather can get a bit chilly so a hat and mitts are recommended. Any other time of the year, there’s a good chance of sunshine in the mornings, oftentimes followed by afternoon showers. It’s wise to bring extra clothes to keep warm and dry as well as an umbrella or rain jacket.

One way to enjoy Taroko Gorge is by a taiwan tour company. There are many that will take you to highlighted destinations, on guided hikes as well as provide accommodations and a lunch of local cuisine. If you’re feeling adventurous the park can also be explored by car, motorbike, or on foot! There is a paved highway that twists through the gorge as well as numerous hiking trails of various lengths and difficulty. Around every corner visitors will find spectacular views, new land formations and maybe even a face or two. There is a Taroko National Park headquarters where maps and hiking maps are available, as well as notices of festivals, aboriginal arts (singing and dancing), bus schedules, hotel information, a cafe and souvenir shop. The National park headquarters also have a nature display of the flora and fauna of the park – great for kids. The park is home to 90% of Taiwan’s birds, some 144 species. Also more than 300 different types of butterflies and many endangered and rare species such as the tree frog, the civet (fox-like mammal), wild boar, serpent eagle, Reeve’s Muntjac (a barking deer), and many more animals that thrive in the parks rainforest.

There are hotels, hostels and B&B’s in Hualien city, 26km / 9mi outside of the gorge (hwy 9). Inside the park, the town of Tiensiang has accommodations as well as the villages of Fuhsih or ChongDe. (see map)

Don’t Miss! – The best sites in Taroko Gorge from east to west: 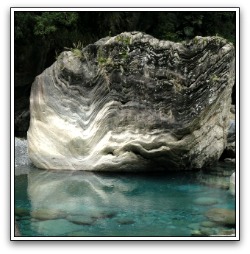 The gorge still experiences landslides from the heavy rains and earthquakes. Rocks can fall on the roads and trails and block the path. Driving or hiking should be done in the daytime and always be careful if it rains and fog rolls into the valley.