Earthquake Taiwan – almost every other day in Taiwan there is an earthquake. That statement is a minor exaggeration, but considering that geologists have found 42 active fault lines across Taiwan and that Taiwan sits on the Pacific earthquake “Ring of Fire,” it’s not much of an exaggeration. 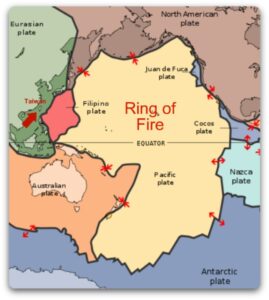 Most of the earthquakes Taiwan experiences are so minor that many people don’t notice them. If you’re driving your car or motorcycle for example, you’ll simply not feel a magnitude 2 or 3 earthquake. Every couple of months, there is an earthquake large enough to be felt. Most people in Taiwan take these tremors in stride as – much like people in Japan — they have gotten used to them. Most of Taiwan’s earthquakes occur in the Pacific Ocean off Taiwan’s East Coast and as Taiwan’s eastern side is not heavily populated, little damage is done to property or life. When an earthquake is centered under the land of central or western Taiwan, however, damage can be catastrophic.

The earthquakes in Taiwan that caused the greatest loss of life over the last century occurred in 1906, 1935 and 1999. The earthquake Taiwan experienced in 1906 claimed over 1000 lives. The 1935 Taiwan earthquake was the deadliest, killing the most people – over 3000. But the earthquake Taiwan most remembers is the September 21, 1999 earthquake (known in Taiwan as the 921 earthquake or 921 quake) which killed 2415 people, injured over 11,000 and completely destroyed or damaged over 100,000 buildings.

At 1:47 a.m. on September 21st 1999, a 7.3 magnitude earthquake struck Taiwan. It’s epicenter was located in almost the exact center of Taiwan – a mountainous region called Nantou County. The small towns of Puli, Jiji and Wufeng suffered terrible destruction, but even in relatively faraway Taipei City, a 12-story building collapsed killing 87 people. The quake lead to some serious soul-searching amongst Taiwanese as it was discovered that many of the collapsed buildings were the result of shoddy construction work, lax enforcement of building codes and incompetent inspectors.

Today there is a museum dedicated to the 921 quake located in greater Taichung City which boasts a walkway directly over a fault line. There is also a heavily damaged elementary school that has been preserved exactly as it was from that day the quake struck. The area that was the epicenter of the 921 quake has mostly recovered and is a popular tourist destination today – 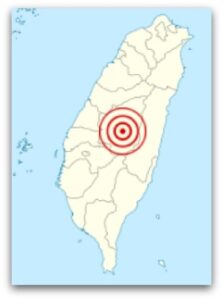 not only for earthquake museums and commemorations but also for eco-tourism and mountain scenery.

Modern buildings in Taiwan adhere to relatively strict earthquake construction codes, but of course there are many older buildings that would be destroyed in the event of another major quake. Another large Taiwan earthquake hit in 2006 and another in 2010, but their epicenters were in rural areas resulting in only minimal damage and two casualties.
People in Taiwan know they live under the threat of earthquakes, but Taiwan does not have regular earthquake drills such as are found in Japan. Public parks and some schools are, however, designated as emergency shelter zones and schoolchildren are instructed on how to ride out the quake.

One practical bit of advice given by earthquake experts in Taiwan is – should you feel an earthquake beginning to strike, if possible, open the door of your apartment as there have been cases of buildings shifting in quakes, leading to doors being jammed shut, trapping occupants inside.
Other than that, people are advised to follow the same procedures for dealing with an earthquake in Taiwan as recommended anywhere else in the world: drop to the ground, take cover under a sturdy piece of furniture such as a table, stay away from glass windows and stay inside until the shaking stops.

Research from the United States shows that most injuries during earthquakes happen when people who are inside buildings try to move into a different location in the building or try to leave their house — so stay where you are and ride it out.