The Flag of Taiwan

Technically, the flag of Taiwan doesn’t exist – Taiwan does not have a flag. The flag one sees flying across the island on government buildings, schools and along all major streets and highways during the October 10th National Day (Double Ten Day) is the flag of the Republic of China and it has a rather lustrous history. The flag follows the same design elements as the flag of the Untied States, with a smaller rectangle in the upper left corner. In this smaller rectangle there is a blue background with a white, 12-pointed sun or star-like emblem, while the rest of the flag’s area is solid red. The white star with a blue background is called ‘Blue Sky with a White Sun’ and the 12 points represent the 12 months of the year and also represent progress. 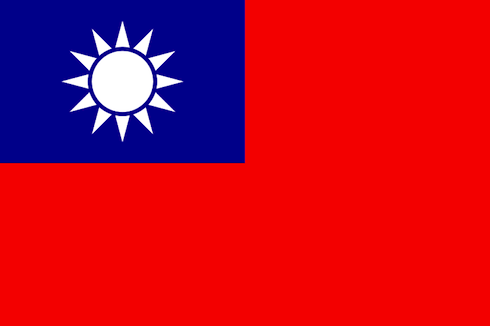 While a popular misconception is that Dr. Sun Yat Sen designed the flag himself, actually it was Dr. Sun’s childhood friend Lu Hao-tung. Dr. Sun added the red area to create the flag we use on Taiwan today in 1906. Lu Hao-tung was one of the first martyrs in the cause of turning China from a monarchy to a republic. Lu was executed by the Qing Empire in 1895 after an early failed uprising. (1895 was the same year Taiwan became a part of Japan. Click here for more on Is Taiwan a Country?)

For a while during the early days of China’s revolution, each army sported their own revolutionary flag. One early contender for the flag of the new Republic of China was the “Five Races 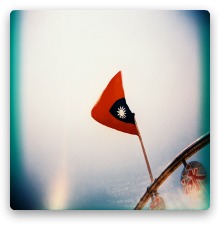 Under One Flag” with five bars of descending colors – red, yellow, blue, white and black. The “Five Races” flag was the more common ROC flag until roughly 1928 when the various warlords were united under a central government. The Kuomintang (Chinese Nationalist Party or KMT) adopted the ‘Blue Sky White Sun’ as their official party flag and emblem and so it remains to this day. This move has created controversy as now both the flag of the KMT and the National flag contain the same emblem. It’s as if the American flag had the Republican elephant mascot adorned on it, which would be very strange indeed. The KMT was once just one political party, but they ended up taking control of China before being defeated by the communists in 1949. It’s almost as if there was not enough time for a mature political evolution of the flag to occur and today it’s a strange historical curiosity that every ROC uniform bears what could be interrupted as the KMT’s logo. Naturally, pro-independence Taiwanese are not fond of the ‘Blue Sky White Sun,’ but, as it was enshrined in the ROC constitution in 1947, it is the official flag until further notice.
The flag of the ROC on Taiwan has flown proudly from battlefields during WWII and was flown at the UN from the organization’s inception until the late 1970s when communist China became the official representative for “China.”

Local pro-independence activists have come up with a few designs for the flag of Taiwan – independent Republic of Taiwan. (Although the ‘R.O.T.’ doesn’t have a really good ring to it) The “Republic of Taiwan” did once have an official flag. In 1895 as the Japanese navy was preparing to land on Taiwan, a group of prominent Taiwanese who could not accept that China had given the island to the Japanese Empire after defeat in the first Sino-Japanese War, declared Taiwan an independent country and requested western nations to come to its aid. As expected, the west was less than interested. The ROT flag – with the image of a tiger — flew for mere months before Japanese troops arrived to enforce their colonial rule.