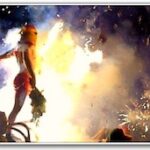 In this Taiwan video, watch as Master Han Dan get pummeled with fireworks, firecrackers, and bottle rockets.

Where: The Bombing of Master Han Dan Festival is held along the eastern coast of Taiwan in Hualien County and Taitung (TaiDong) county.

When: It is celebrated on the 15th day of the first lunar month, during the Lantern Festival.

Who: Any man can volunteer to play the role of the god of wealth. They will go through weeks of vigorous training before the day of the festival.

Why: Master Han Dan is believed to be the embodiment of the god of wealth. People throw firecrackers and fireworks at his body – the more they throw, the more good fortune and wealth will come to them that new year. It is said that throwing firecrackers at the god will warm his cold body.

There are a couple of theories of The Bombing of Master Han Dan’s origins.

How: The volunteer will be naked except for red shorts and a cloth to cover their face. They are given Banyan branches to fan away the firecrackers and are hauled around on a “Holy Sedan Chair” by four other people. They will be marched through the town past all the businesses where the more explosives thrown at Han Dan, the more economic growth the businesses will see the following year. In some places the festival is held in a big field with carnival-like games, night market style food and snacks, sky lanterns, and of course, a big fireworks display at the end of the night. The Master Han Dan’s are marched around the fields while all the townspeople and visitors throw firecrackers at him.